Water purification is the process of removing undesirable chemicals, biological contaminants, suspended solids and gases from contaminated water. The goal of this process is to produce water fit for a specific purpose. Most water is disinfected for human consumption (drinking water) but water purification may also be designed for a variety of other purposes, including meeting the requirements of medical, pharmacological, chemical and industrial applications. In general the methods used include physical processes such as filtration, sedimentation, and distillation, biological processes such as slow sand filters or biologically active carbon, chemical processes such as flocculation and chlorination and the use of electromagnetic radiation such as ultraviolet light.

The purification process of water may reduce the concentration of particulate matter including suspended particles, parasites, bacteria, algae, viruses, fungi; and a range of dissolved and particulate material derived from the surfaces that water may have made contact with after falling as rain.

The standards for drinking water quality are typically set by governments or by international standards. These standards will typically set minimum and maximum concentrations of contaminants for the use that is to be made of the water.

The processes below are the ones commonly used in water purification plants. Some or most may not be used depending on the scale of the plant and quality of the raw (source) water.

Widely varied techniques are available to remove the fine solids, micro-organisms and some dissolved inorganic and organic materials. The choice of method will depend on the quality of the water being treated, the cost of the treatment process and the quality standards expected of the processed water.

Pure water has a pH close to 7 (neither alkaline nor acidic). Sea water can have pH values that range from 7.5 to 8.4 (moderately alkaline). Fresh water can have widely ranging pH values depending on the geology of the drainage basin or aquifer and the influence of contaminant inputs (acid rain for example). If the water is acidic (lower than 7), lime, soda ash, or sodium hydroxide can be added to raise the pH during water purification processes. Lime addition increases the calcium ion concentration, thus raising the water hardness. For highly acidic waters, forced draft degasifiers can be an effective way to raise the pH, by stripping dissolved carbon dioxide from the water. Making the water alkaline helps coagulation and flocculation processes work effectively and also helps to minimize the risk of lead being dissolved from lead pipes and from lead solder in pipe fittings. Sufficient alkalinity also reduces the corrosiveness of water to iron pipes. Acid (carbonic acid, hydrochloric acid or sulfuric acid) may be added to alkaline waters in some circumstances to lower the pH. Alkaline water (above pH 7.0) does not necessarily mean that lead or copper from the plumbing system will not be dissolved into the water. The ability of water to precipitate calcium carbonate to protect metal surfaces and reduce the likelihood of toxic metals being dissolved in water is a function of pH, mineral content, temperature, alkalinity and calcium concentration.

One of the first steps in a conventional water purification process is the addition of chemicals to assist in the removal of particles suspended in water. Particles can be inorganic such as clay and silt or organic such as algae, bacteria, viruses, protozoa and natural organic matter. Inorganic and organic particles contribute to the turbidity and colour of water.

The addition of inorganic coagulants such as aluminum sulfate (or alum) or iron (III) salts such as iron(III) chloride cause several simultaneous chemical and physical interactions on and among the particles. Within seconds, negative charges on the particles are neutralized by inorganic coagulants. Also within seconds, metal hydroxide precipitates of the aluminum and iron (III) ions begin to form. These precipitates combine into larger particles under natural processes such as Brownian motion and through induced mixing which is sometimes referred to as flocculation. The term most often used for the amorphous metal hydroxides is “floc.” Large, amorphous aluminum and iron (III) hydroxides adsorb and enmesh particles in suspension and facilitate the removal of particles by subsequent processes of sedimentation and filtration. Aluminum hydroxides are formed within a fairly narrow pH range, typically: 5.5 to about 7.7. Iron (III) hydroxides can form over a larger pH range including pH levels lower than are effective for alum, typically: 5.0 to 8.5.

In water purification plants, there is usually a high energy, rapid mix unit process (detention time in seconds) where the coagulant chemicals are added followed by flocculation basins (detention times range from 15 to 45 minutes) where low energy inputs turn large paddles or other gentle mixing devices to enhance the formation of floc. In fact, coagulation and flocculation processes are ongoing once the metal salt coagulants are added. Organic polymers were developed in the 1960s as aids to coagulants and, in some cases, as replacements for the inorganic metal salt coagulants. Synthetic organic polymers are high molecular weight compounds that carry negative, positive or neutral charges. When organic polymers are added to water with particulates, the high molecular weight compounds adsorb onto particle surfaces and through interparticle bridging coalesce with other particles to form floc.

When particles to be removed do not settle out of solution easily, Dissolved Air Flotation (DAF) is often used. Water supplies that are particularly vulnerable to unicellular algae blooms and supplies with low turbidity and high colour often employ DAF. After coagulation and flocculation processes, water flows to DAF tanks where air diffusers on the tank bottom create fine bubbles that attach to floc resulting in a floating mass of concentrated floc. The floating floc blanket is removed from the surface and clarified water is withdrawn from the bottom of the DAF tank.

After separating most floc, the water is filtered as the final step to remove remaining suspended particles and unsettled floc.

The most common type of filter is a rapid sand filter. Water moves vertically through sand which often has a layer of activated carbon or anthracite coal above the sand. The top layer removes organic compounds, which contribute to taste and odour. The space between sand particles is larger than the smallest suspended particles, so simple filtration is not enough. Most particles pass through surface layers but are trapped in pore spaces or adhere to sand particles. Effective filtration extends into the depth of the filter. This property of the filter is key to its operation: if the top layer of sand were to block all the particles, the filter would quickly clog.

To clean the filter, water is passed quickly upward through the filter, opposite the normal direction (called backflushing or backwashing) to remove embedded particles. Prior to this step, compressed air may be blown up through the bottom of the filter to break up the compacted filter media to aid the backwashing process; this is known as air scouring. 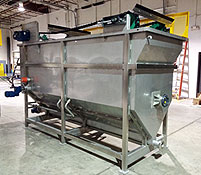 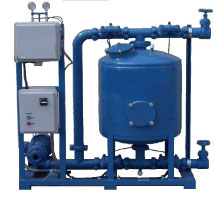 Pressure Filter
This contaminated water can be disposed of, along with the sludge from the sedimentation basin, or it can be recycled by mixing with the raw water entering the plant although this is often considered poor practice since it re-introduces an elevated concentration of bacteria into the raw water. Some water treatment plants employ pressure filters. These work on the same principle as rapid gravity filters, differing in that the filter medium is enclosed in a steel vessel and the water is forced through it under pressure.

Membrane filters are widely used for filtering both drinking water and sewage. For drinking water, membrane filters can remove virtually all particles larger than 0.2 um—including giardia and cryptosporidium. Membrane filters are an effective form of tertiary treatment when it is desired to reuse the water for industry, for limited domestic purposes, or before discharging the water into a river that is used by towns further downstream. They are widely used in industry, particularly for beverage preparation (including bottled water). However no filtration can remove substances that are actually dissolved in the water such as phosphorus, nitrates and heavy metal ions.

Disinfection is accomplished both by filtering out harmful micro-organisms and also by adding disinfectant chemicals. Water is disinfected to kill any pathogens which pass through the filters and to provide a residual dose of disinfectant to kill or inactivate potentially harmful micro-organisms in the storage and distribution systems. Possible pathogens include viruses, bacteria, including Salmonella, Cholera, Campylobacter and Shigella, and protozoa, including Giardia lamblia and other cryptosporidia. Following the introduction of any chemical disinfecting agent, the water is usually held in temporary storage – often called a contact tank or clear well to allow the disinfecting action to complete.

Chlorine dioxide is a faster-acting disinfectant than elemental chlorine. It is relatively rarely used, because in some circumstances it may create excessive amounts of chlorite, which is a by-product regulated to low allowable levels in the United States. Chlorine dioxide is supplied as an aqueous solution and added to water to avoid gas handling problems.

Ozone is an unstable molecule which readily gives up one atom of oxygen providing a powerful oxidizing agent which is toxic to most waterborne organisms. It is a very strong, broad spectrum disinfectant that is widely used in Europe. It is an effective method to inactivate harmful protozoa that form cysts. It also works well against almost all other pathogens. Ozone is made by passing oxygen through ultraviolet light or a “cold” electrical discharge. To use ozone as a disinfectant, it must be created on-site and added to the water by bubble contact. Some of the advantages of ozone include the production of fewer dangerous by-products and the absence of taste and odour problems (in comparison to chlorination) . Although fewer by-products are formed by ozonation, it has been discovered that ozone reacts with bromide ions in water to produce concentrations of the suspected carcinogen bromate. Bromide can be found in fresh water supplies in sufficient concentrations to produce (after ozonation) more than 10 parts per billion (ppb) of bromate — the maximum contaminant level established by the USEPA. Another advantage of ozone is that it leaves no residual disinfectant in the water. Ozone has been used in drinking water plants since 1906 where the first industrial ozonation plant was built in Nice, France. The U.S. Food and Drug Administration has accepted ozone as being safe; and it is applied as an anti-microbiological agent for the treatment, storage, and processing of foods.

This article uses material from the Wikipedia article “Water purification”, which is released under the Creative Commons Attribution-Share-Alike License 3.0.

Ecologix Environmental Systems is a world-class manufacturer and integrator of wastewater treatment equipment for the oil & gas, food, manufacturing, and automotive industries. Learn more About Ecologix.